No volumes are associated with this topic

Central banks are appointed by the executive branch, and yet are expected to be "Independent".

Central Banks are expected to maintain currency stability, but the people who appointed them can necessarily fire them, so they tend to depend on obscure terminology to maintain academic "independence" from their elected bosses. An example is raising or lowering the "tax rate" when there are two tax rates going in opposite directions. There is one rate you charge foreigners to borrow their money. And there is a second (generally lower) rate you dictate to the banks to charge citizens of your own country for borrowing from much the same foreigners. The "spread" between the two rates is an attempt to regulate the "money supply"; if one of the two rates is constant, then the variation of the remaining rate usually adjusts the money supply in response to market forces. Most commonly, the central bank leaves one domestic interest rate unchanged, and the money supply is thus adjusted to maintain stability in the face of variation of world-wide fluctuation of the true rate. Temporarily, unpleasant events may cause unpleasant variations, and the central bank responds by changing one domestic rate in the opposite direction; usually, this is a temporary stabilization, and the market rate soon reverts to its best opinion of the true fiscal rate.

However, the executive branch has to pay the interest on its borrowings and wishes to keep the interest cost as low as possible. When there was a prevailing gold standard, there was a reversion to it. When the world went off the gold standard, government interest rates began to creep upward. Although the central banks agreed to hold it at 3% per year, the "market" declared its debt was worth less than 2% -- inflation refused to appear, so to speak, unless the creditor nations got a higher interest rate, too. Carried to an extreme, foreign creditors would refuse to lend more money to increase the debtor money supply any further.

Some time ago, the Irish government lowered taxes quite decisively to 12.5%. Ordinarily, lowering or even eliminating corporation taxes can be defended as stimulating business by reducing the double taxation of the stockholders. Reducing taxes in any way is stimulatory to an economy, but there are certain cautions to be issued. If an economy is suffering from inflation, there might be better things to do with government surpluses, like paying off debts. And under any circumstances, going too far, too fast, can be disruptive. What happened in Ireland was first a dizzy boom, which on closer examination was triggered by enticing foreign corporations to move their headquarters to Ireland to enjoy the lower taxes. And then the second response was a housing bubble of major proportions since Ireland has traditionally been a rural nation, and when the rural population rushed to the cities to take the new jobs, there was no place to live. Since they were in the position of having to return to the farms unless they paid exorbitant housing costs, the migrants paid exorbitant housing costs. Two room cottages on the way to the airport were selling for a million dollars.

Back inside the Irish banks, this boom was experienced as a rush to take out mortgages, far larger than the banks of a small nation were prepared to finance. The larger banks of larger countries were willing to buy these loans from the issuing banks, a situation not greatly different from American west coast banks selling them to Wall Street securitization firms on the east coast. And with the same effect; the issuing banks surrendered to moral hazard and reduced their lending standards, while the chain of purchasing banks was similarly tempted to ignore the quality of the loans they were flipping. American movie houses were filled with movies depicting the evil nature of Wall Street financiers, but here was an example of exactly the same result without securitization. While moral hazard is an unfamiliar moral truism, the fact is that moral truisms are of more enduring value than the eternal search for a culprit. Except for incorrigible whiners, everyone could see the general principle was more important than the individual actors. The person who issues the mortgage is the one who looks the debtor in the eye; that issuer must retain some skin in the game. It's true at every step of the process, although what proportion of the loan must remain with each re-issuer is a matter of debate. Government's function is to adjust the proportion of loan retention according to some set of rules, making sure the actors follow the rules. Beyond that, the process of secondary sales of debt is an important advance in finance, allowing surpluses in China to be used to support deficits in another hemisphere, to the ultimate benefit of everyone.

The Irish crisis should by rights have landed almost exclusively in the laps of the German and French banks which purchased this rotten debt, but governments intervened. The Irish government foolishly guaranteed the debts of its banks, so its own solvency was threatened by responsibility for debt which exceeded half of the GDP of Ireland. A staged workout of such size could ultimately lead to national debt levels twice the size of the GDP. At some point, perhaps at this point, debt grows to a size that cannot possibly be repaid. Since a bailout by the rest of the European community essentially means Germany assuming the Irish debt, the solvency of all of Europe would be threatened if Portugal and Spain followed the example of Greece and Ireland. At some point, the Germans will rebel. If the United States, through the IMF, participated in guaranteeing impossible outcomes, even the United States could be threatened. In the world of international finance, "growth" is the magic formula for eventually working the world through such a crisis. A highly optimistic projection of 3% growth leads to a dream-world goal of growing out of this mess in a century. To be a pessimist in this environment is perhaps to be a realist. 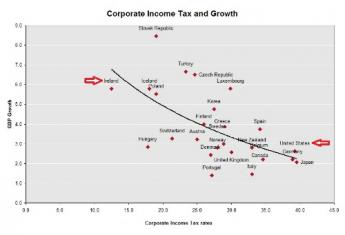 The Irish Government lowered corporate taxes to 12.5 % and sucked continental corporations into moving to Ireland. A housing bubble ensued, surplus mortgages were sold to foreign banks, and very soon Irish debt began to look too big for any conceivable repayment. The European Bank bailed them out, but this may not be the end of it.