Health (and Retirement) Savings Accounts: Steps To Lifelong Health Insurance
If you are a fast reader, we will begin with a ten-minute summary of Health Savings Accounts. At first, it covers future revenue, then spending projections follow. No matter how medical care changes, cost and revenue must remain in balance.

In 1965, the originators of Medicare made two mistakes, both of which seemed perfectly understandable at the time. To get the program rolling, they enrolled my parents' generation to enjoy the benefits without charge, if they were already over age 65 (my mother lived to be 103). And for the same reason, they used current revenues to pay for such older people, who had never contributed to their own costs. The system was called "pay as you go" to justify taking current revenues to pay for benefits unsupported by previous contributions. Money flowed out as fast as it was received, but Medicare never made a serious effort to catch up.

Consequently, there was no interest paid for the use of the money, but the program did get started, years before it would otherwise seem feasible. The program is now over fifty years old however, and it still isn't gathering interest on cash which doesn't get spent for decades. Furthermore, the health of the population invisibly improved so rapidly that decades were added to the lifespan of Americans, and the interest income being lost steadily increased, as well. Since everyone likes to live thirty years longer, pay as you go was considered a reasonable price to pay for it.

However, the possibility has apparently been overlooked that a transition to pre-paid insurance might only be mildly painful. And even if the transition proved to be very painful, eventually the cost savings of Medicare passed on to the subscriber, might be reduced by millions and millions. It is now time to examine whether biting this bullet could really be relatively painless any longer and whether it would save much money. The answer appears to be Yes to both questions. To begin, the arithmetic will be skipped, and the reasoning explained. Following that, the arithmetic is concentrated for those who wish to reassure themselves; it may be skipped by those who don't. If you get the reasoning straight, the math is easily checked by compound interest calculators on the Internet. If you do that, you may find the Internet calculators sometimes create some errors themselves, however, so check your fact-checking.

Medicare is partially prepaid by withholding roughly 3% of a subscriber's wages in advance, as can be seen on any pay stub. From age 25 to age 65, the money aggregates to equal about a quarter of Medicare's actual cost. Another quarter is repaid by premiums, from people actually receiving Medicare. Although the data is overwhelmingly voluminous, it can be found among the Internet reports of CMS, the Center for Medicare and Medicaid. Since patient payment revenues thus aggregate to only half of the total Medicare expenditures, the residual half is paid out of the general fund of taxes, and later borrowed to restore the fund. (Partisans might say it is laundered through the general fund before it is borrowed.) About 13% of our bonds are held by oriental foreigners, and most of the rest is loaned to American citizens. This is how Mrs. Sibelius explained things in her report on the Internet when she was in charge of it. The accumulating debt is now becoming serious, even accounting for the slang phrases used in Congress, suggesting this debt can never be repaid. Stick it to the Chinese, except 87% of it is ultimately owed to U.S. citizens. And U.S. citizens would take most of the haircut, as another saying goes if the debt were dishonored.

Now, focus on an important feature of the average Medicare cost. As a total departmental cost, it includes every person who becomes eligible for Medicare by attaining age 65. It is not exactly what the average person pays, rather, it includes the whole program including those who pay nothing. Therefore, privatizing Medicare with the same funds would not deprive the indigent of anything at all; present funding already includes them. That's one of the main attractivenesses of "single payer", defined as Medicare for everyone at any age-- it's essentially all-inclusive. Unfortunately, its deficit is all-inclusive, too. For present analysis it's a rhetorical advantage to say, any new system using the old money would be all-inclusive as well. Except for half of the increased cost causes a correspondingly increased deficit. At present, the annual deficit is about $200 billion.

It's also important to acknowledge that extended retirement benefits are an innate obligation of Medicare, and right now retirement costs aren't provided at all, except for the (older) Social Security program. Good care leads to a longer life, and we should be grateful. But longer life is expensive, and most people will find they have not saved nearly enough to make it comfortable. For this, there should be more sympathetic. Nothing like this had ever happened before, so some skeptical people cannot be entirely blamed for wanting to see some hardship before they believe the government cannot borrow its way out of it. The financial crunch of some sort is surely coming in the near future because we are recovering from a recession, a political party deadlock, and the threat of both domestic uproar and international discord, both at once. But the health care arithmetic remains pretty clear, as we will see in the next section.

At present, about half the cost of Medicare is recovered by the U.S. Treasury. Without paying any interest, the revenue immediately gets spent, and an equal amount is borrowed -- that's what we just said. So to speak, we only propose to change the mailing address of the checks, that's what we also said. Just deposit that same money (in the same amount) into your Health Savings Account, get a tax deduction for doing so, and earn compound interest on the combined amount. With a tax deduction adding 18% in value and transferring the money at age 65, it will in fact be more money than you appear to need, and it would certainly be less debt.

For the first time, it provides some retirement money "to compensate" for the extra longevity Medicare has provided. If you earn enough investment income (say, 7%), it will be enough to pay for the whole program, including indigents and disabled, so long as they are over 65 or entitled to a special Medicare disabled program, as 9 million already are. Remember, that promise includes a retirement fund. If you don't earn enough investment income, it won't cover it all but it will surely cover more than it would have, without any compound interest and tax shelter. And the investment return would probably be increased at the expense of the financial community, who will resist. Fee-only advice, rather than commissions, would add about one percent to investor returns, according to the Wall Street Journal, although lobbyists for Wall Street vigorously deny it. The proposal here is to insist both systems operate side-by-side until the difference is clear.

Although the arithmetic seems to be pretty evident, we do advise creating a contingency fund in addition, just to be safe. The contingency fund would have to be at least a hundred dollars at birth and might be as much as two hundred-fifty. That's the only extra expense for a lifetime of healthcare and retirement which actuaries estimate to cost an average of $350,000 per average lifetime, plus an equal amount for retirement, to say nothing about the hidden elimination of the government's deficit for Medicare. That's a pretty good bargain, so we suggest consideration of paying some of the resulting surpluses to a children's fund, rather than just letting it appear in estates. You can tell yourself you've helped little children while protecting yourself against contingencies. The Medicare crisis goes away, the Retirement crisis is abated, the national debt stops expanding, and a start is made on the childhood problem -- all with money you're already spending, plus a hundred or so dollars, just for safety and dignity. Read on, just in case you are good at math, and you don't believe in miracles.

By the way, it has been implied this release of money is due to inflation, and it is true the inflation assumption (for income and general expenses alike) remains about 3%. But the real success secret beyond any person's control is inherent in the mathematics of compound interest. When an investment goes much beyond thirty years in duration, the effective interest rate rises spectacularly; you can thank Medicare for that, if you wish, or perhaps Aristotle. Inflation raises your retirement cost, that is true. But it also raises your income, so at present, it's a short-term wash except for scientific advances, which are surely a long-term net improvement. 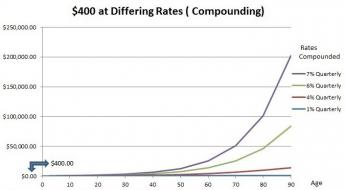