As background for this story, let me say that I want to preserve the environment as much as anyone else. After considering the matter, it seemed to me that the largest contribution I could make to the "greening" effort would be to replace my home heating oil burner with a gas burner. That would improve my efficiency from 68% to 97% (or reduce the waste going up the chimney from 32% to 3%) of about 2600 gallons of fuel oil a year. The initial investment would be repaid in about three years, our dependence on imported oil would be reduced about as much as I could reduce it, and there was apparently a new abundant discovery of reliable gas production nearby. Compared with this, I barely use a tenth as much gasoline in my car, so potential savings in a hybrid car would seem trivial by comparison. And, sorry, I'm just not going to plant sedum on my roof, or dig water well through bedrock, or put a windmill in my front yard. Going to a gas furnace might be my big contribution to the environment, at least for the present.

It is, however, distressing to hear stories of gas wells poisoning water supplies, tearing up the roads, and destroying whole species of birds in their annual migrations. So, it was time to go look for me. My guide was an acquaintance of an acquaintance who lived in the midst of the gas region, a retired sergeant from the professional Army who had found the cost of living in the Endless Mountains was quite moderate, and just about everybody in the county was related to him or his wife. Mike will forgive me for saying he physically resembles Sergent Snorkel in the Beetle Baily cartoon but has the personality of everyone's favorite uncle. It's a three-hour drive into the Endless Mountains (that's really the name) in the center of the northern tier of Pennsylvania's counties. The big local town is Montrose, which has only one traffic light, only one police car, and only two policemen. It's really a charming little town, where nothing seems to have happened for excitement since the days of the Underground Railroad, whose headquarters still stands a block from the county courthouse. Montrose is the county seat of Susquehanna County. If this was the environment that gas fracking was going to destroy, that would be a pity. 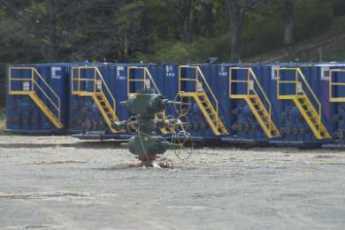 Except the people who live there don't think so at all. At first, the gas drillers came around and offered the farmers $25 an acre for drilling rights, but competition soon established they were worth closer to $1000. The conjecture is that Susquehanna County was singled out for early exploration because it is already crossed by the Tennessee pipeline, and thus the early gas discoveries could be quickly marketed. The full extent of the Marcellus Shale deposit is from Canada to Texas, although it may prove to be patchy, and its estimated content is greater than that of Arabia. Since there isn't much to talk about in Montrose except the deer hunting season, the drilling employees are a ready source of information about something local that is very big, very big indeed. The employees work 12-hour shifts, seven days a week for six weeks, and then have two weeks off. If that's too much for you, plenty of people can be imported from the Detroit area to drive trucks. There are essentially no hotels, so they live in rented rooms, and they like to talk to the locals.

It costs a million dollars to drill each well, and they finish it in three weeks. The work actually begins earlier, as a stone is quarried and crushed to construct a level platform. Then, glorified dumpsters on wheels are rolled to the site, the well goes up a hundred or more feet, and the sand, water, and secret chemicals are pumped seven thousand feet into the ground. Lateral drilling goes on at three thousand feet underground, and connections to neighboring wells go out at various levels. It a giant beehive of activity in the cornfield for three weeks, and then it's all over. The derrick comes down, the dumpsters are dragged away, the top of the well is capped. It takes about six months for the weeds to take over, and just about all that is left visible amounts to a rather large fire hydrant, sticking up ten feet in the woods or corn field. It is a considerable relief to hear that water injection ceases after the initial three weeks; visions of lakes and rivers drying up forever are not likely. The drilling companies are quite sensitive to the appearance they leave; as is sometimes said of good artisans, they are careful to leave a clean site when they leave. Yes, the heavy truck traffic breaks up roads, but mostly the roads were one-car wide and have been enlarged to all-weather two-lane roads by the drillers themselves, the local residents are quite proud of the improvement. In their eyes, the place looks a lot better. Since the region participates in the astonishing snowfalls for which Syracuse and other upstate New York cities are famous, there is a great deal of relief from the winter-long isolation caused by mounds of snow. As far as contaminated water is concerned, the water injected into the wells is trucked in from elsewhere in those wheeled dumpsters. As the technology evolves, the tendency now is to mix the sand and surfactants on the spot, when originally they were mixed off-site. Much of the used brine is pumped back out and evaporated on large plastic sheets, washed, and the residual sand is reused. Far from cutting corners, these drillers seem to be going to extremes to avoid complaints. And then, of course, there is the money they pay for drilling rights.

The most famous example of drilling royalties is known to every local, shown to every visitor. Owning 180 acres close to the pipeline, one widely-admired citizen is believed by everyone to be receiving $180,000 per month and will continue to receive it until the gas runs out. The rather large farmhouse could use a coat of paint, and as was made famously true in the play "Tobacco Road" the laundry is done on the porch and dried on a clothesline, also on the porch. The neighbors' joke that it has gone to his head because three new automobiles sit in the yard. One wisecrack was that he must have been playing the tuba on a day it rained gold. He, however, isn't a rarity, a great many neighbors for miles around are getting similar windfall payments. That seems to have two immediate consequences.

In the first place, it marshals local opinion strongly on the side of the drillers. One is not surprised to learn they hate taxes, favor depletion allowances, and generally take positions common in western Texas. One pert little hamlet in the valley has gone to court to insist on piped-in drinking water because methane gas bubbles out of their faucets. Just before an election, a local court granted that request in spite of learning that the water will cost $650,000 per house, more than most people would say the houses are worth. Local neighbors are far from sympathetic to this cause. They firmly believe the drilling company offered to solve the problem at far less cost by drilling wells with purification systems, but the lawyers advised their clients to hold out for bigger windfalls. It is widely believed by neighbors that gas has been bubbling out of well water in that region for a hundred years. If by any chance this legal action should kill the goose that laid this golden egg, these deer-hunting, gun-owning royalty recipients seem entirely capable of making an uncomfortable showing. Pennsylvania elects its judges, its legislators, and its congressmen. No doubt candidates for the November 2 election have been questioned for their views, and will learn the voters' views November 3rd.

The other response is just as expected as that one, and is called "The Dutch Disease" by economists. As these windfall enrichments seep out into the local community, the local economy will be upset just as the Dutch economy was upset by the discovery of oil and gas in the North Sea. Everyone would rather work for the drilling companies than for established local industries if indeed they see any sense in working at all. The clearest indication of what is coming is seen on a large sign attached to an old storefront: "Investment Advice Offered". It takes a long time to learn that the main difference between a good investment and a bad one is the hidden fees you pay. Not market timing, not stock picking, not diversification, not hot tips. Fees, charged by your new best friend, are the thing. So, here are two pieces of advice: investment management in size is worth 40 basis points or four-tenths of a percent; that's it and that's all. And the second piece of advice comes from your Pennsylvania grandmother: don't marry the first man who asks you.

And what are the rest of us to make of this shale gas thing? Well, I've already installed a new gas furnace in my house, the supply of gas seems assured enough for twenty years. Any politician who tried to tax this windfall out of existence will soon see what the political realities are. The environmental realities are quite favorable; once the drillers have stopped injecting water and taken down the equipment, there's not much to see except a ten-foot fire hydrant surrounded by weeds. All the connections are buried underground, leading to terminals many miles away. At first, the drillers may feel they need to post some guards, but it surely won't be necessary. The locals are convinced, and the environmentalists only need to drive up on a weekend and see for themselves.