Philadelphia's River Region
A concentration of articles around the rivers and wetland in and around Philadelphia, Pennsylvania.

Franklin Inn Club
Hidden in a back alley near the theaters, this little club is the center of the City's literary circle. It enjoys outstanding food in surroundings which suggest Samuel Johnson's club in London.

Investing, Philadelphia Style
Land ownership once was the only practical form of savings, until banking matured in the mid-19th century. Philadelphia took an early lead in what is now called investment and still defines a certain style of it.

City of Rivers and Rivulets
Philadelphia has always been defined by the waters that surround it.

Right Angle Club 2010
2010 is coming to a close, a lame-duck session is upon us, and probably after that will come two years of gridlock. But the Philadelphia Men's Club called the Right Angle, keeps right on talking about the current scene. A few of these current contents relate to speeches given elsewhere.

William Penn planned to put his mansion on top of Faire Mount, where the Art Museum now stands. By 1880, long after Penn decided to build Pennsbury Mansion elsewhere, city growth outran the capacity of the new reservoir system which had then been placed on Fairmount. An additional set of storage reservoirs were placed on another hill across East River (Kelly) Drive, behind Robert Morris' showplace mansion now called Lemon Hill (Morris merely called it The Hill); the area was eventually named the East Park Reservoir. In time, trees grew up along the ridge and houses got built; the existence of these reservoirs right in the city was easily forgotten, even though the towers of center city are now plainly visible from them. These particular reservoirs were never used for water purification; that's done in four other locations around town, and the purified water is piped underground to Lemon Hill, for last-minute storage; gravity pushes it through the city pipes as needed. 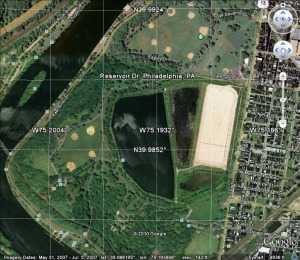 Now, here's the first surprise. Water use in Philadelphia has markedly declined in the past century. That's because the major water use was by heavy industry, not individual residences, so one outward sign of the switch from a 19th Century industrial economy to a service economy is -- empty old reservoirs. Only one-quarter of the reservoir capacity is in active use, protected by a rubber covering and fed by underground pipes. The rest of the sections of the reservoir are filled by rain and snow, but gradually silting up from the bottom, marshy at the edges. Unplanted trees have grown up in a jungle of second-growth, attracting vast numbers of migratory birds traveling down the Atlantic flyway. Although there are only a hundred acres of water surface here, the dense vegetation closes in around the visitor, giving the impression of limitless wilderness, except for the center city towers peeping through gaps in the forest. It's fenced in and quiet except for the birds. For a few lucky visitors, it's easy to get a feeling for how it must have looked to William Penn, three hundred or more years ago, and Robert Morris, two hundred years ago. In another sense, it demarcates the peak of Philadelphia's industrial age, from 1880 to 1940, because that kind of industrialization uses a lot of water.

The place, in May, is alive with Baltimore Orioles. Or at least their songs fill the air and experienced bird watchers know they are there. Even a beginner can recognize the red-winged blackbirds, flickers, robins, and wrens (they like to nest in lamp posts). The hawks nesting on the windowsills of Logan Circle suddenly makes a lot more sense, because that isn't very far away. In January, flocks of ducks and geese swoop in on the water surface, which by spillways is kept eight feet deep for their favorite food. Just how the fish got there is unclear, perhaps birds of some sort carried them in. The neighborhoods nearby are teeming with little boys who would love to catch those fish, but it's fenced and guarded much more vigorously since 9-11. In fact, you have to sign a formal document in order to be admitted; it says "Witnesseth" in big letters. Lawyers are well known for being timid souls, imagining hobgoblins behind every tree. However, there are some little reminders that evil isn't too far away. Just about once a week, someone shoots a gun into the air in the nearby city. It goes up and then comes down at random, with approximately the same downward velocity when it lands as when it left the muzzle upward. That is, it puts a hole in the rubber canopy over the active reservoir, which then has to be repaired. No doubt, if it hit your head it would leave the same hole. So, sign the document, and bring an umbrella if the odds worry you. 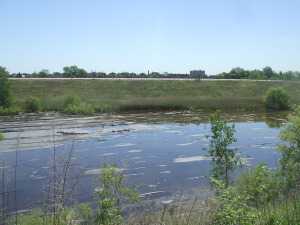 A treasure like this just isn't going to remain as it is, where it is. It's hard to know whether to be most fearful of bootleggers, apartment builders or city councilmen, but somebody is going to do something destructive to our unique treasure, possibly discovering oil shale beneath it for example, unless imaginative civil society takes charge. At present, the great white hope rests with a consortium of Outward Bound and Audubon Pennsylvania, who have an ingenious plan to put up education and administrative center right at the fence, where the city meets the wilderness. That should restrict public entrance to the nature preserve, but allow full views of its interior. Who knows, perhaps urban migration will bring about a rehabilitation of what was once a very elegant residential neighborhood. And push away some of those reckless shooters who now delight in potting at the overhead birds. 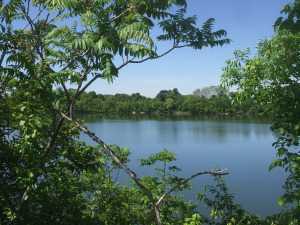 This whole topic of waterworks and reservoirs brings up what seems like a Wall Street mystery. Few people seem to grasp the idea, but Philadelphia is the very center of a very large industry of waterworks companies. The tale is told that the yellow fever epidemics around 1800 were the instigation for the first and finest municipal waterworks in the world. There's a very fine exhibit of this remarkable history in the old waterworks beside the Art Museum. But that's a municipal water service; why do we have private equity firms, water conglomerates, hedge funds for water industries, and other concentrations of distinctly private enterprise in the water? One hypothesis offered by a private equity partner was that the success of the municipal water works of Philadelphia stimulated many surrounding suburbs to do the same thing; it was surely better than digging your own well. This concentration of small and fairly inefficient waterworks around the suburban ring of this city might well have created an opportunity for conglomerates to amalgamate them at lower consumer cost. Anyway, it seems to be true that if you want to visit the headquarters of the largest waterworks company in the world, you go about seven miles from city hall and look around a nearby shopping center. If you are looking for the world's acknowledged expert in rivers, you go to the Academy of Natural Sciences of Philadelphia on Logan Square and look around for a lady who is 104 years old. And if you have a light you are trying to hide under a barrel, come to Philadelphia.

Thank you. That's a great story.