Philadelphia Politics
Originally, politics had to do with the Proprietors, then the immigrants, then the King of England, then the establishment of the nation. Philadelphia first perfected the big-city political machine, which centers on bulk payments from utilities to the boss politician rather than small graft payments to individual office holders. More efficient that way.

Haddonfield is a bit of a secret. It's Philadelphia's "Main Line, East"

Academia in the Philadelphia Region
Higher education is a source of pride, progress, and aggravation.

Indigents
With a long history of welcoming and assisting the poor, Philadelphia has always risked swamping the lifeboat by attracting more of them than it can handle.

Education in Philadelphia
Taxes are too high, but the tax base is too small, so public education is underfunded. Drug use and lack of classroom discipline are also problems. Business and employed persons have fled the city, must be induced to return. Deteriorating education, rising taxes and crime are the immediate problems, but the underlying issue is lack of vigor and engagement by the urban population itself.

As this blog went to press, voters throughout South Jersey had just gone to the polls to vote for school boards and school budgets. Or, at least they had the opportunity to do so, but mostly 15% of eligible voters actually troubled to vote. Meanwhile, school officials chewed their nails in apprehension that many budgets would be disapproved by the taxpayers, and then what? As it turned out, Haddonfield and Moorestown approved their budgets, but over half of the 700 school districts of the state did not. The voters wanted to send a message they were angry about property taxes, and the seemingly related fact that over half of school employees are not teachers. Some of them mistakenly believe county taxes have something to do with schools. If they had really understood the situation, they would have been angry that the size of their local school budget has comparatively little to do with the level of their total tax burden.

Meanwhile, voters with children had been agitating to support the budget or even raise it, even if it raised their taxes; but empty nesters were urging each other to go vote down this budget because their taxes were already excessive. The parents of schoolchildren urged the empty nesters to move somewhere else where they couldn't vote down school budgets. Actually, however, if more empty nesters moved in, property taxes would go down without affecting the school budget, because empty-nesters pay taxes without using the schools. Both groups are quite misguided, however, because raising or lowering school budgets would probably have very little effect on overall taxes. Even school officials failed to make their best case to the public because they misunderstood the tricky way taxes are arranged. They defend every budget by saying it is already cut to the bone. Since it presently makes relatively little difference to overall taxes whether the budget is cut or increased, that's not useful in persuading empty nesters. Budget cutting does make a lot of difference to the quality of education, however, but that's only half of the facts, not a balanced one. The moral of all this is that the voters better get educated about the Jersey political scene, before their children lose the chance to get educated at all. 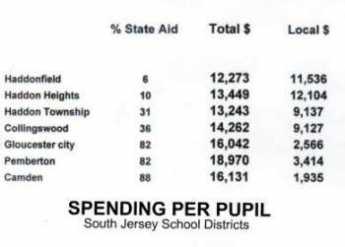 Since I'm an empty nester, I am pretty familiar with the empty-nest viewpoint. Three of my friends have told me they moved to neighboring suburbs in order to lower their tax burden; they undoubtedly know what they are talking about. But no one I know is able to reconcile that fact with the equally certain fact that Haddonfield has the lowest spending on education, per pupil, in the southern half of the state. In fact, they don't care, because they know that local school taxes are significantly lower almost everywhere else, and they don't have to explain why. School officials should be more concerned with explaining their rank in per-pupil spending compared with other districts, but they are driven to make cuts in service where ever they can in order to produce a leaner budget for the voters. They too, seem oblivious to the fact that voter anger won't be soothed for long by their budget cutting because it won't affect overall taxes. Taxes are what people are mad about, but they must consider all of them, and understand that as one goes down, the other will probably go up. In another article, we discuss how they mysteriously go up even more. A more sophisticated view would be that in addition to concern about eradicating poverty in the long run, residents of New Jersey are increasingly driven by the need to get their children into better quality colleges. They would like to improve secondary education to do so but are hampered by the relative unavailability of high-quality colleges in the state. Some of this has to do with the recent tendency of Princeton and Rutgers to seek a geographical diversity of students. But to be cynical about it, the development officers of those colleges know that major donors are to be found in Texas and California. In New Jersey, the majority of income taxes are paid by 1% of the population, and that !% are fleeing the state to avoid its heavy income and estate taxes, just as fast as they can. This is the group that tends to donate most heavily to college improvements, and New Jersey colleges are suffering from their flight. That argument may well be hard to sell in Newark and Camden, but it has a major indirect effect on business creation and employment in the state as a whole.

To return to basics, New Jersey school spending is governed by the Abbott decision, which happens to have been written by a friend of mine, who is a fine, smart, well-intentioned jurist. So-called Abbott districts were found by the courts to have significantly underfunded schools, to the point where it seemed an important public issue that the wealthier parts of the state must help these underprivileged kids get an adequate education. Whether improving the school system in their districts would reduce the crime rate, or welfare rate, among these children in later life, was not then known, but subsequent experience does not give it much support. Mainly, it wasn't so much trying to reduce public expenditures in the long run that was behind the Abbott decision, as the feeling it was the duty of a prosperous society to give deprived kids an even break, a sort of penance for success. Accordingly, state school tax revenues were rearranged in an effort to make the per-pupil spending for education approximately equal in all districts, and particularly in the most deprived areas, the Abbott Districts. The first clear sign that something unintended was happening is shown in the accompanying table, indicating that spending in the Abbott districts was in fact now about fifty percent greater than in prosperous nearby suburbs. Equality might be all right, but fifty percent greater was probably not acceptable to the taxpaying public. Just how that paradox gets accomplished in Trenton is not yet clear, but the discomfort level about it is heightened by noticing there is generally an inverse relationship between the spending per-pupil and the perceived quality of the educational product. You might compare drop-out rates, crime rates, SAT scores or whatever, but public perception is not likely to overcome data seeming to show that the more you spend, the worse the education. One wag commented that the data also seems to show that the further you get from the Delaware River, the lower the educational spending gets; that relationship is also more or less linear. So, what matters here is opinion, and the prevailing opinion is emphatic that this data is upside down. The Abbott decision that school spending must be equalized but is actually greater accounts for much of this funny data, but in addition there almost has to be some overlooked secondary factor which exaggerates the Abbott effect by as much as 50% beyond equality.

Even the education industry has an incentive to explain at least and possibly to correct, this disparity. Because in politics while you can prove almost anything with statistics, it is quite seductive to imply that this data proves that extra educational spending hurts the quality of education, at least above a certain level. The education industry wouldn't be wise to let that sort of accusation go unanswered, even if it comes as a wisecrack. The real empty-nester accusation, sorry to say, is that "My school taxes are way too high. They not only do me no personal good but are not helping underprivileged children, either." The consequence is empty-nesters are driven out of town and out of state, making taxes higher for everyone else. It could take decades to undo this damage with an angered public, so everybody better get to work explaining and correcting the problem.