Shaping the Constitution in Philadelphia
After Independence, the weakness of the Federal government dismayed a band of ardent patriots, so under Washington's leadership a stronger Constitution was written. Almost immediately, comrades discovered they had wanted the same thing for different reasons, so during the formative period they struggled to reshape future directions . Moving the Capitol from Philadelphia to the Potomac proved curiously central to all this.

...Authorship of the Constitution
There were seventy invited delegates to the Constitutional Convention. Fifty-five attended the sessions, and thirty-nine signed it. We believe the main contributions were made by seven or eight men. But you can never tell, for certain.

Fisher on Running For Office

Last night, I was honored to receive the Republican nomination for a seat in the state Assembly, to represent the district where I have lived for over fifty years.

Signers and Non-Signers of the Constitution

John Dickinson was active in designing both the Declaration of Independence and the Constitution, but he signed neither one. His position on the Declaration was that England had behaved in an offensive way; but the situation was getting better and it was still possible to patch things up, even with a British fleet in New York harbor displaying hostile intent. His later position on the Constitution is less clear. Dickinson asked George Read to sign his name because he was sick. Whether this was a real illness or a diplomatic illness is not readily known.

Three active delegates made no bones about their opposition to the final product: Edmond Randolph and George Mason of Virginia were not mollified by private assurances that a Bill of Rights was necessary but could be added later. They refused to sign a constitution that did not currently include this most passionate of their demands. There is little doubt of their sincerity, but any politician today would recognize they also needed to protect their flank from Patrick Henry who stayed at home denouncing the whole enterprise. Henry was a powerful speaker, representing the Scotch-Irish Virginia Piedmont area. In Scotland, Ireland, and America, that group had been abused by English kings three times and wanted iron-clad protection against backsliding to English rule or English government models. It's quite possible that Virginia's George Wythe and James McClurg left the convention early in order to avoid the local political consequences of signing the document, or the equally uncomfortable stance of opposing George Washington. The sentiments of Virginia can be surmised when of the seven delegates sent by Virginia, only John Blair joined the two instigators, George Washington and James Madison in announcing their approval. A majority of the Virginia delegation was thus held back on ratification until only one last vote was needed for enactment. Without George Washington, there can be little doubt the whole effort would have failed. Indeed, a case could be made that the location of the District of Columbia and the election of Virginians as four of the first five presidents also has the appearance of trying to persuade the six hundred pound Virginia gorilla to play nice.

Elbridge Gerry of Massachusetts similarly refused to sign any constitution which did not include a Bill of Rights. However, Gerry undermined his stance on principle by inventing the technique of packing his opposition into one voting district (by shifting its borders) so his own party could win narrow majorities in several other districts. This sleazy manipulation of loopholes in the system has become known as Gerrymandering and raises a question perhaps unfairly, of where Gerry actually stood on every other issue in the Constitutional Convention. By contrast, it is impossible to imagine George Washington doing such a thing, and quite possible to imagine he would never again speak to someone who did.

In addition to the three delegates who stayed to the end but refused to sign, an additional four left early to demonstrate their protest: John Lansing and Robert Yates of New York; and Luther Martin and John Mercer of Maryland.

We are left less clear about the opinions of seven more who simply left the convention early (Oliver Ellsworth of Connecticut, William Houston and William Pierce of Georgia, Caleb Strong of Massachusetts, William Houston of New Jersey, and William Davie and Alexander Martin of North Carolina.) The same uncertainty extends to the eighteen delegates who were invited to attend but either refused or regretted their inability to attend: (Erastus Wolcott of Connecticut, Nathaniel Pendleton and George Walton of Georgia, Charles Carroll, Gabriel Duvall, Robert Hanson Harrison, Thomas Sim Lee, and Thomas Stone of Maryland, Francis Dana of Massachusetts, John Pickering and Benjamin West of New Hampshire, Abraham Clark and John Neilson of New Jersey, Richard Caswell and Willie Jones of North Carolina, Henry Laurens of South Carolina, and Patrick Henry, Richard Henry Lee, and Thomas Nelson of Virginia). These men were originally selected because of their local eminence, so some of them may have been unable to spend several months in a City that took days to reach on horseback. On the other hand, we certainly know where Patrick Henry stood, and a large number of other abstentions from certain states suggests more than personal inconvenience was involved. After all, Rhode Island refused even to nominate anyone to the Delegation. In this last case, a political issue was highlighted. The Articles of Confederation which were being replaced not only required unanimous consent to change them, but they affirmed the Articles to be permanent. Under ordinary contract law, that would be dispositive. But George Washington was hell-bent on replacing the Articles of Confederation, so what they said would then no longer matter.

There remains a need for someone, perhaps in a doctoral thesis, to examine the voluminous correspondence and recollections of the large group of non-signers to assess the true nature of their failure to attend or sign. There was plenty of room for honest disagreement, personal business back at home, illness, or feelings of inadequacy. On the other hand, plenty of other subsequent politicians have exhibited an unwillingness to offend anyone, a hope to seek advantage from both sides, or a habitual tendency of waiting to see who would win before stating an opinion. Politics would be better without such personal inadequacies, but politics would not be politics without them. In fairness to their quandaries, the voting on the Constitution was by states, requiring nine to adopt it. If the vote of their state was a foregone conclusion, some delegates probably had a right to go home and let it happen in their absence. In the case of Alexander Hamilton, here stood the sole New York delegate in attendance at the final signing. Since he had been agitating for this sort of reform for seven years before Madison and Washington convinced each other, it seems possible that others withdrew to let him have the limelight. There is little doubt the single remaining responsibility of the signers was to go home and "deliver" their state for ratification, and Hamilton went at that with a vengeance. Although the moment of final signing appears on portraits and in sculpture, it was only the beginning of the battle for adoption, not the final victory. Indeed the Constitution as we now perceive it did not take more or less final form until the early government shaped its operation in actual practice. Most of that shaping process also took place in Philadelphia, during the first ten years while the seat of government was still located there. In particular, many if not most of the elected members of the First Congress had been members of the Constitutional Convention, returning to Philadelphia to finish the job by writing the Bill of Rights. 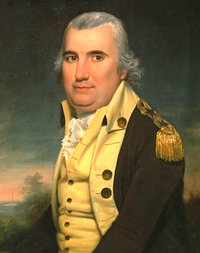 This was very helpful, thanks
I'm in a play about the constitution so I needed to see how they dressed back then... thanks for the help guys
Luther Martin signed the Declaration of Independence, but not only did not sign the Constitution, but voted against it, and denounced it. He did not like strong central governments, English, American, or any other kind.
Was Luther Martin a signer or a non-signer? I have to do a project on him and I don't know what to think.