George IV and Computers(1)
I got him into computers around 1960. He soon far surpassed me.

Health Expenditures as a percent of GDP

My thanks to the US Census Bureau for this information. 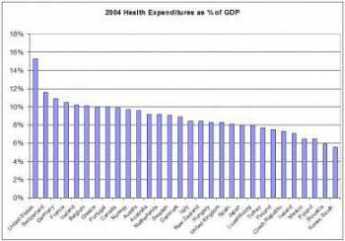 Let's make a couple of comments. Health expenditure as a percent of GDP is a ratio. If health expenditures go up or down while GDP remains the same, the ratio goes up or down. But if GDP goes down or up and health expenditures remain the same, then the reverse is true. In the present atmosphere of slanted debate, America is being compared with France. If we compared the state of Mississippi with France, we would get a different opinion about France. If we compare Ukraine with America, we get a different opinion about our expenditures. It really does seem more appropriate to compare America with Europe as a whole, rather than allow the comparison to be selective in its choice of the sections of Europe under comparison.

The point is this: if you add in the poorer sections of Europe, you reduce the average GDP of the nation (Europe) you compare with America, and hence you increase the expenditures for health care as a proportion of European GDP. At the same time, you would have to add in the average expenditures of the poorer sections of Europe, which will lower the average health expenditures per GDP unit. With twenty-seven different countries included under the heading of "Europe", you can seem to illustrate just about any conclusion you intend to reach, just by modifying the mixture. The same is true of taking different states or sections of the USA. Minnesota is considerably cheaper than Florida, and the quality of health care is if anything superior.

Sorry, the name was Simon Kuznets.
There are many other reasons to question the use of cross country statistcs. Simon Kusents, the economist who on the Nobel Prize for hisdevelopment of our current system of National Income accounts, once discussed the issue in a class at Harvard. He pointed out that the cost of haircuts regulary rose faster than the price of inflation. The explanation was that the compensation for barbers had to keep up with alternative employmnet opportunites, while barbering had seen relatively little labor saving improvements.

The same would seem true of medicine. Although improving technology allows for much better health care it has not reduced the need for highly skilled pratitioners at all levels of medicine. Health care is therefore likely to continue to increase as a percent of GDP, although not without limits because the pressue for labor saving innovatons is likely to become intense.

When comparing accross countries, the US is probably the most invested in labor saving tedhniques. Since the health iindustry has probably not kept up with the rest of economy, it is not surprising that our health care costs - after substracting out a multitude of other causes - is also relatively high compared to other countries.